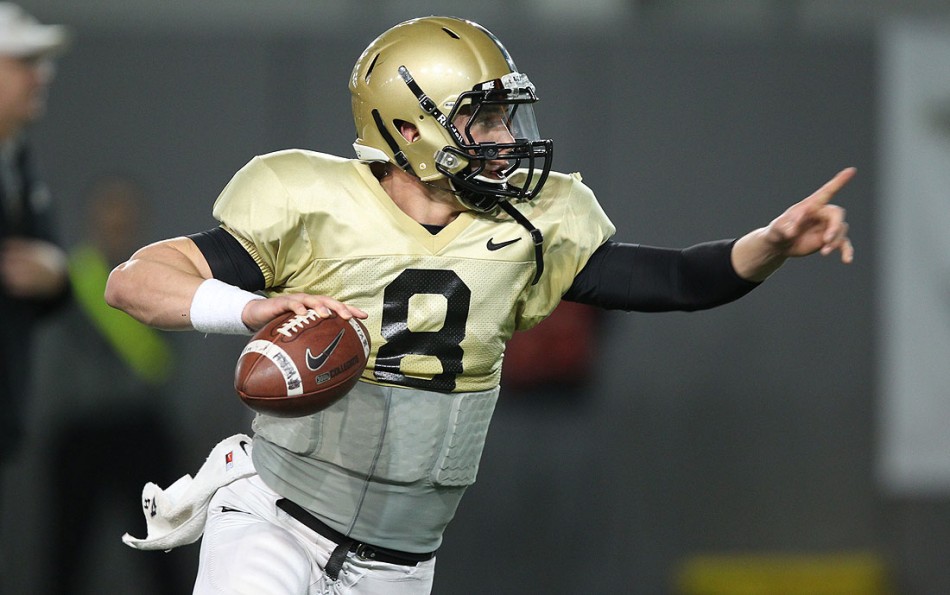 Army has begun its annual spring football camp with a few workouts and scrimmages each week through the end of March. It’s an opportunity for head coach Rich Ellerson and his staff to gauge the talent and possibilities coming up for the 2012 season, and an opportunity for those with something to prove.

Of course, for those like Trent Steelman (above, below), Army’s soon-to-be senior quarterback, this camp is a little easier to endure. Steelman skipped last year’s spring practice after surgery, but he was back on the field Saturday when I stopped by for the 7:30am scrimmage at Foley Athletic Center at West Point. 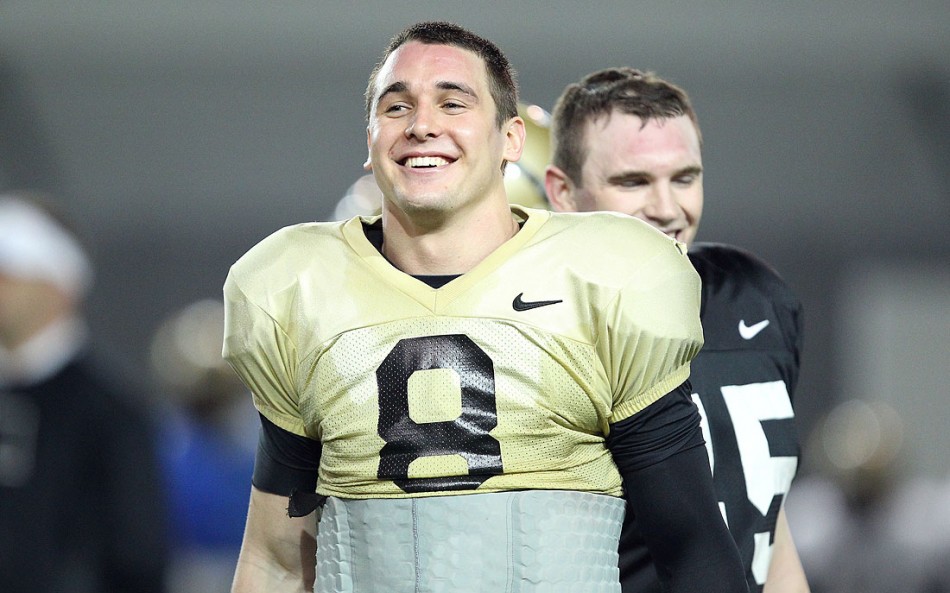 Saturday’s practice lasted over two hours and tested the defensive backs quite a bit (always good to see Tony Coaxum fired up). You can read a recap of the day and check out a video as well here. 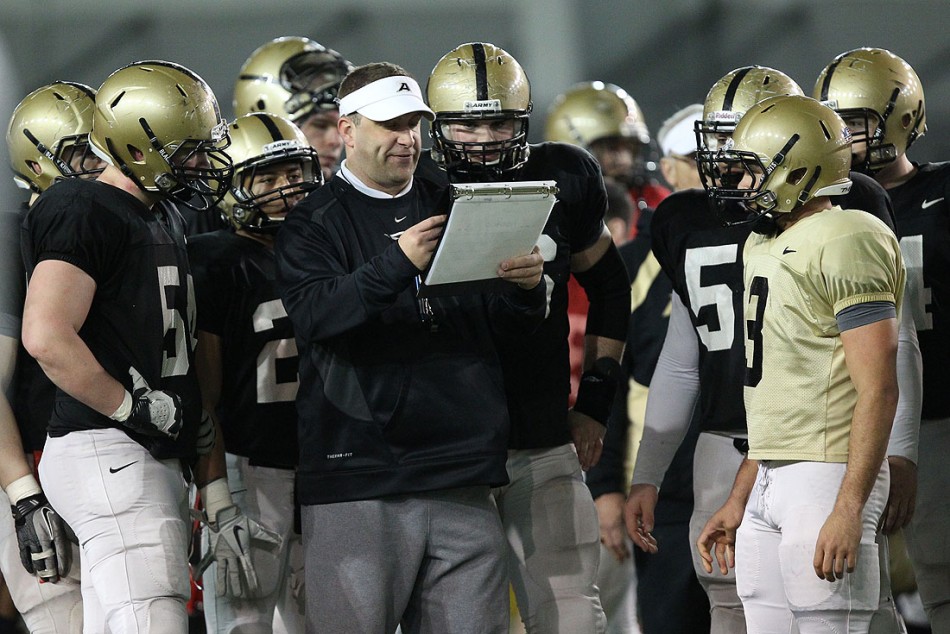 Steelman is the returning star of this offense, but backups like Angel Santiago (below) and Parker Hite both saw a lot of snaps on Saturday. Steelman was the most accurate in these passing drills, although the other QB’s struggled with touch and often overthrew their targets down the lines.

“The coaches are really emphasizing takeaways this spring,” senior defensive tackle Bobby Kough said Saturday. “We need to get the ball out. Up front, we are working on our assignments and just trying to play hard, physical and fast.” 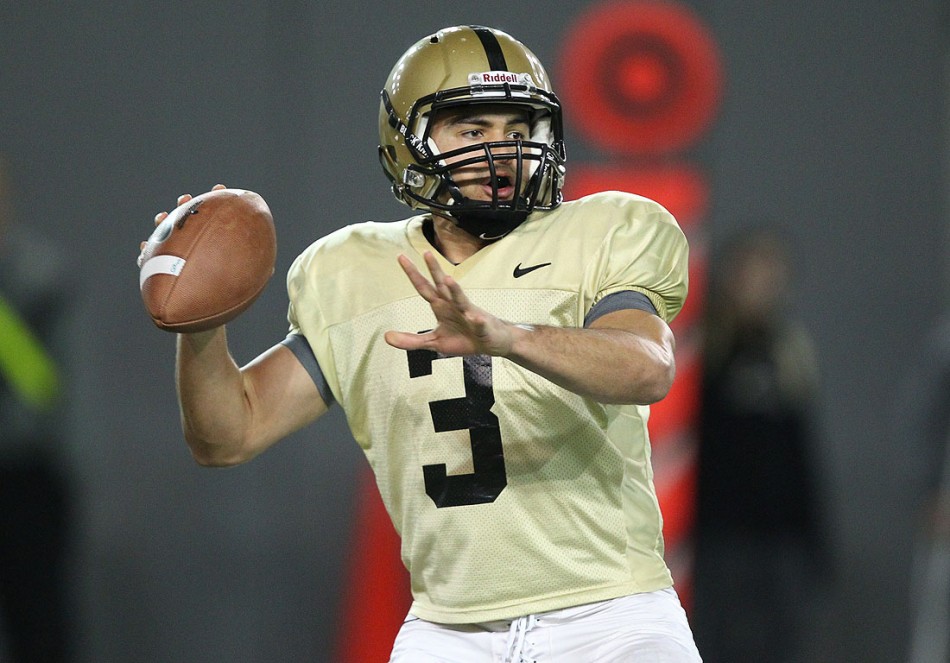 Anthony Stephens (below) looked like Steelman’s No. 1 target in these drills. West Point will have some new faces at wide out next fall as Davyd Brooks will be lost to graduation and local product Jared McFarlin has left the team. Slotback Jon Crucitti is now listed as a wide receiver, and I’m guessing Chevaughn Lawrence and Justin Allen will also be the top of the depth chart by August. None of them are especially tall, so we’ll see how the passing game progresses. 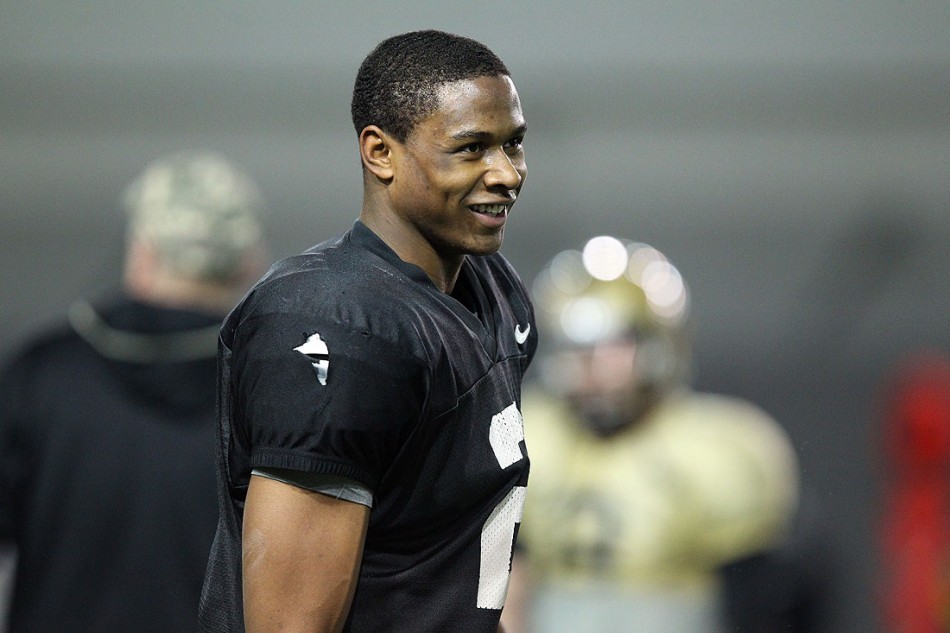 The scrimmage, if you want to call it that, was mostly situational plays where a coach would hold up the playbook (below) and we’d see it in action (I think this is coach Joe Ross below? Correct me if I’m wrong): 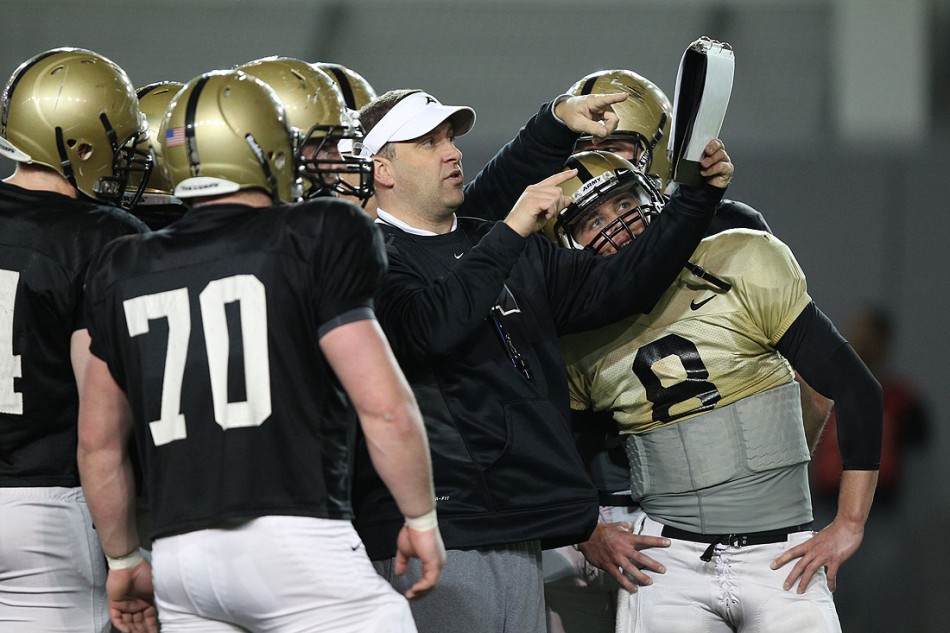 Lawrence hauled in a nice pass for this touchdown. As you can see, the offensive players are wearing flags, although there was plenty of tackling: 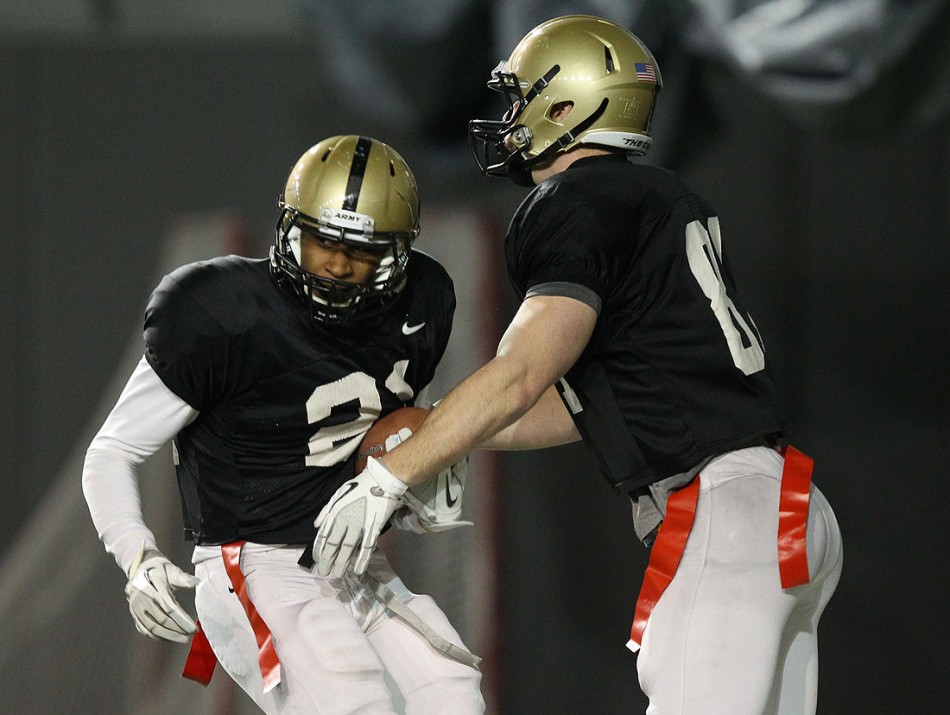 Coach Ellerson roved the field, checking in on his units. “Tomorrow, we’ll flip the emphasis,” he said. “Our defense will be playing other people’s defenses. That doesn’t look nearly as bad because it’s a little easier to play that card and you can transfer those techniques. We’ll keep score tomorrow too. It’ll be hot, and we’ll get on the ground some. The emphasis will be on our offense.” 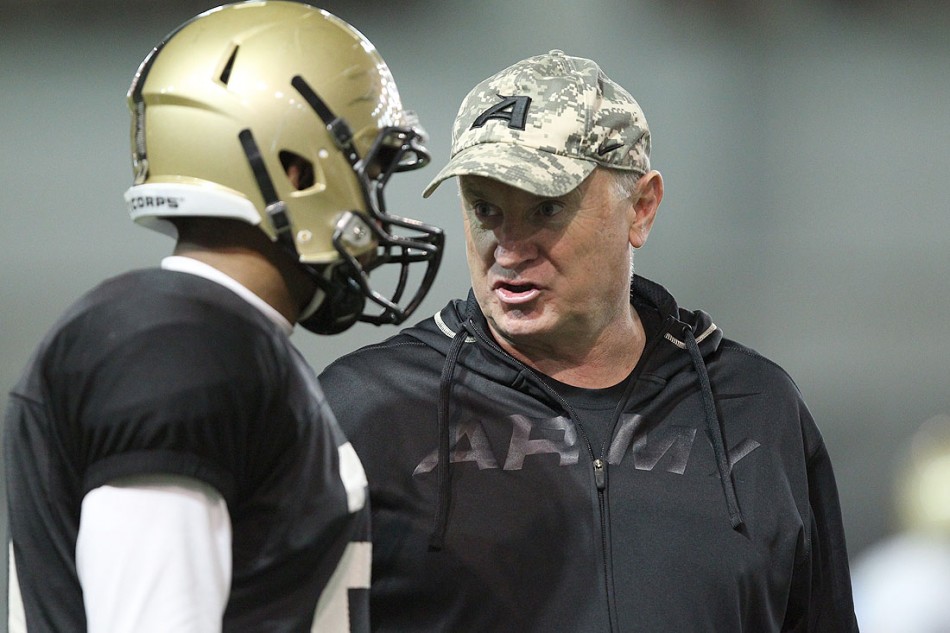 Here’s fullback Jared Hassin, who will be a senior in 2012, catching a pass with the second-team unit. I think one interesting storyline to watch heading into summer practice will be Jared’s role in the offense next week with the emergence of Larry Dixon this past year. Jared is still listed as a fullback and Dixon as a running back, but both lined up at FB in 2011. Will they just rotate next year, or will one be used situationally on third down or just to block? Either way, I would like to see both catching short passes like this one: 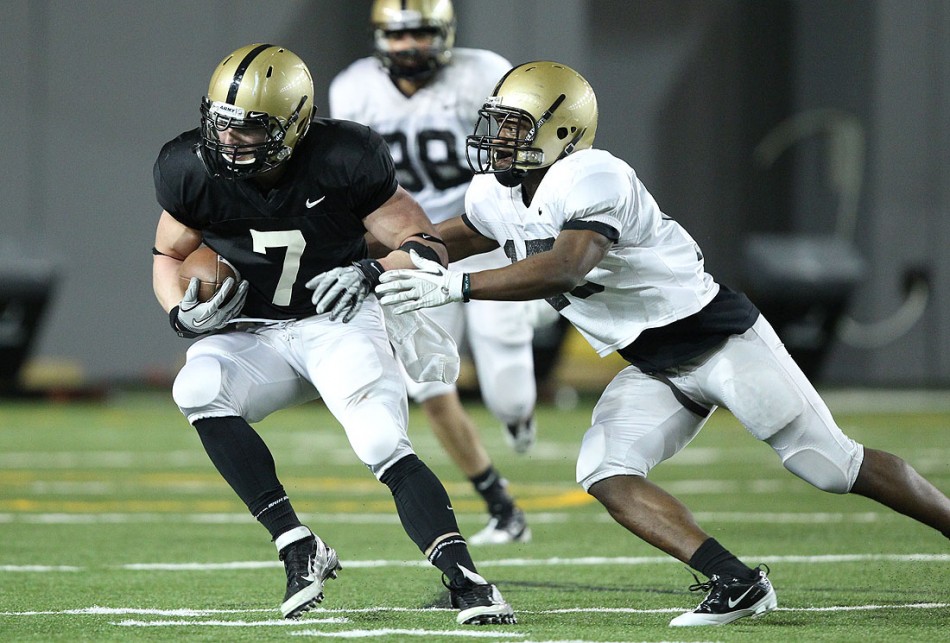 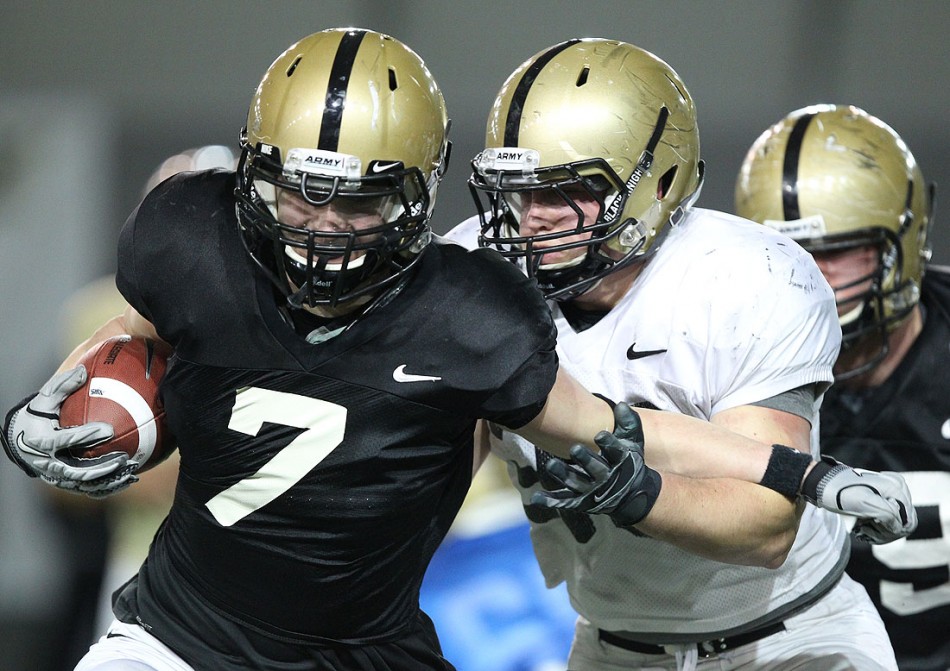 Kelechi Odocha is one of a million talented, quick running backs Army will bring into 2011. Odocha (who rushed for a touchdown last season amidst sparse playing time) will compete with guys like Raymond Maples, Malcolm Brown, Dixon, Hassin, Brian Austin, Scott Williams, Terry Baggett, Trenton Turrentine (who was injured last season) and Stephen Fraser, who saw more action toward the end of 2011. 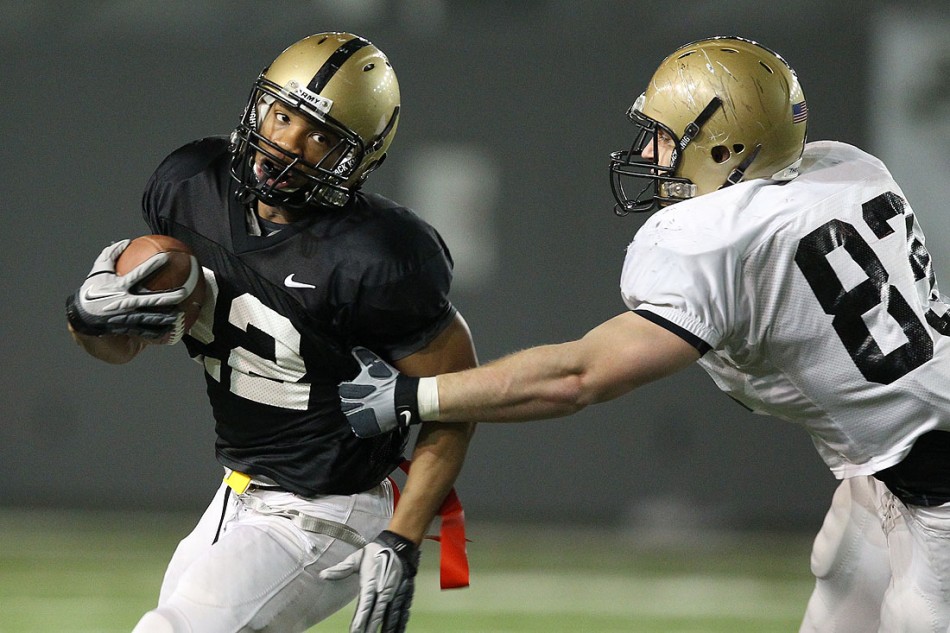 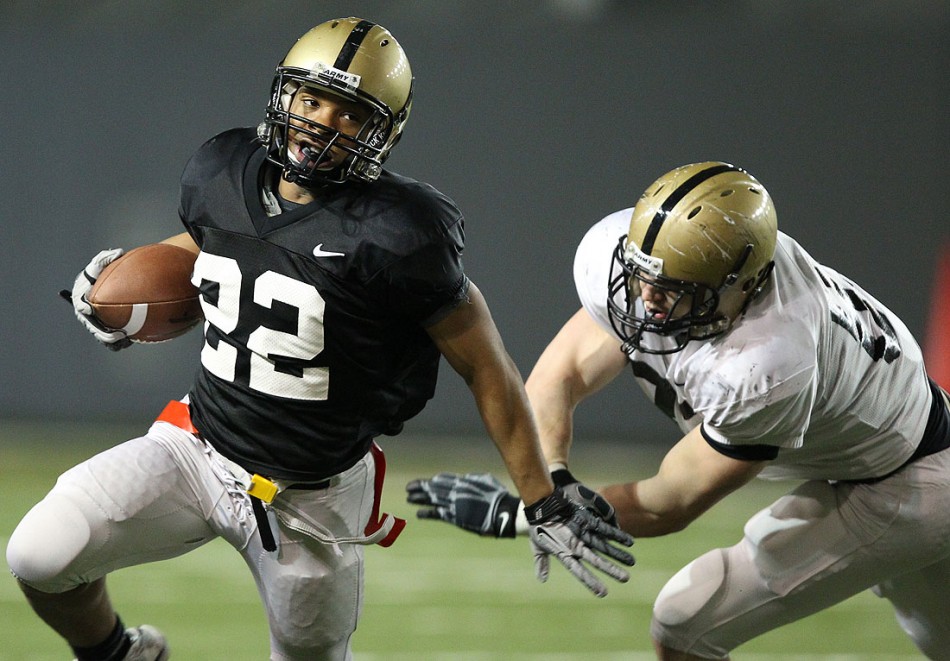 Kyler Martin looked great on defense — remember, this defense won’t have captain Steve Erzinger coming back. Who will step up? Nate Combs is likely going to be that guy, I’d guess, and defensive end Jarrett Mackey was voted a legacy captain despite missing almost all of 2011 with leg surgeries. Martin had a nice pick in this shot below: 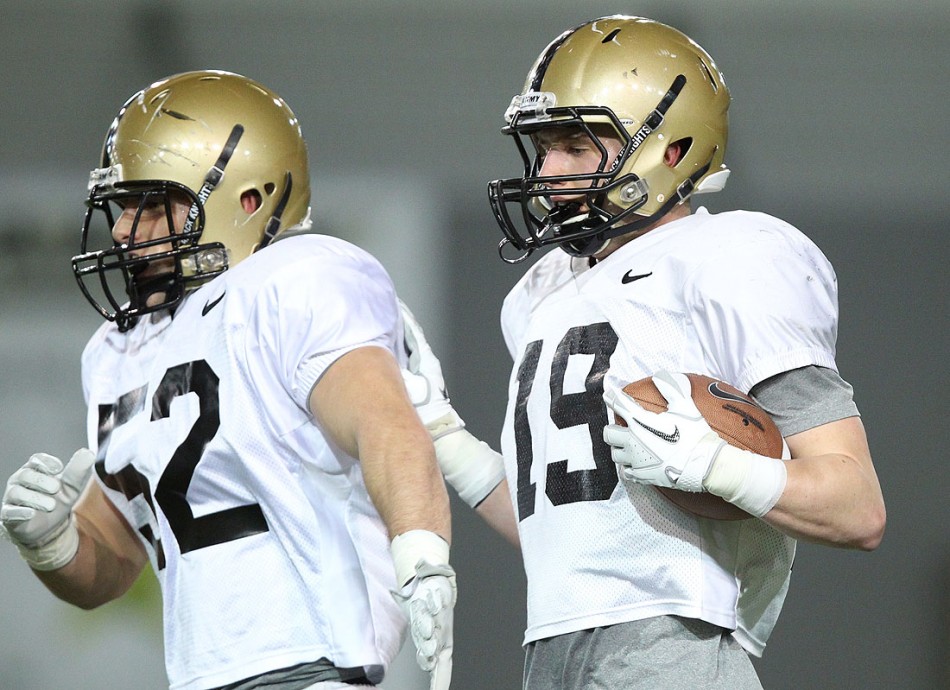 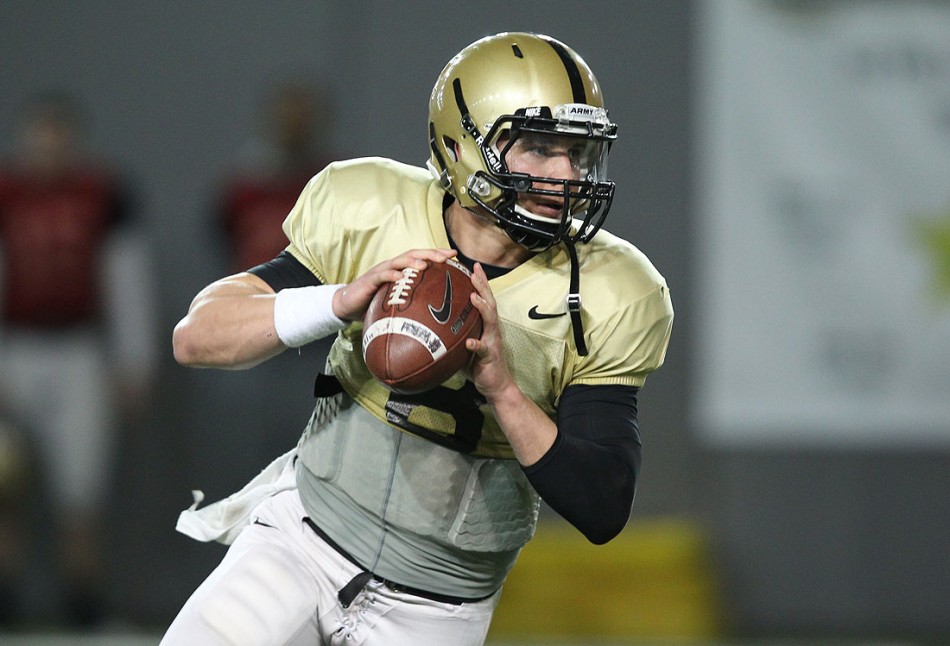 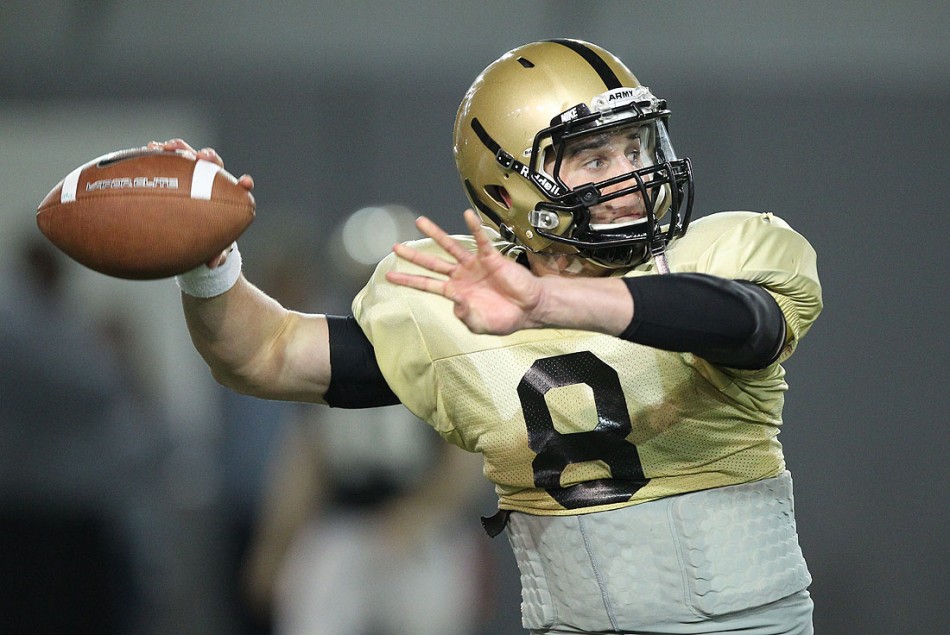 Here’s Trent in a passing drill with Dixon out to block: 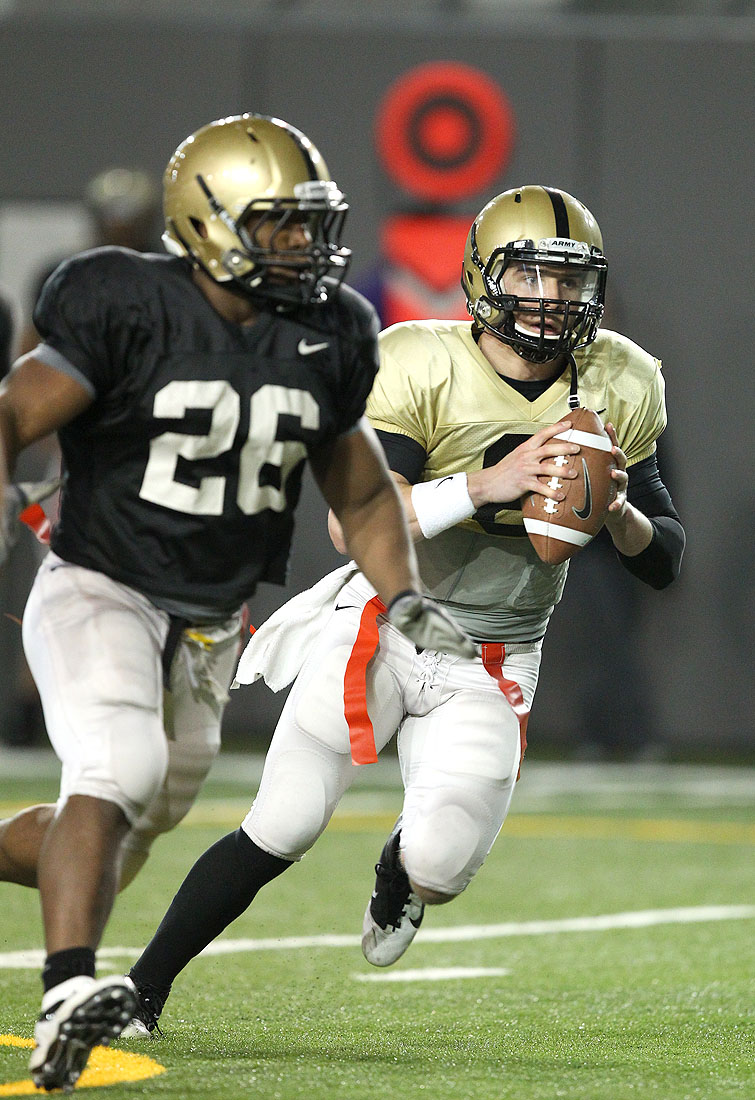 Defensive coordinator Payam Saadat gave himself a spring makeover with a shave: 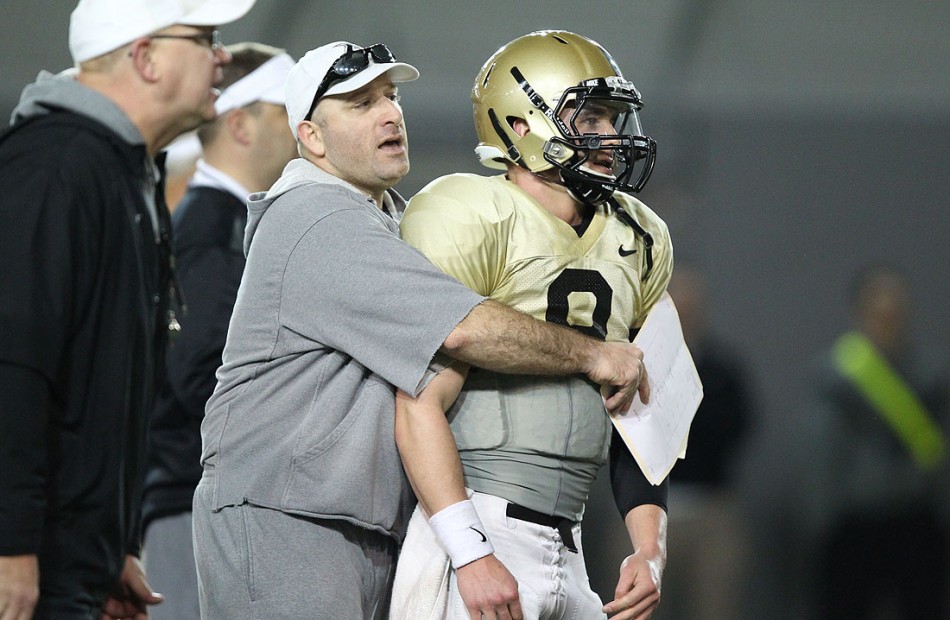 Zach Watts is another returning defensive veteran for 2012 and could emerge as a good pass rusher. During a 9-on-9 inside drill, the offense simulated conventional formations against the Army defense, which started off with Holt Zalneraitis (DE), Jacob Drozd (DT), Kough (DT), Zach Watts (DE), Corey Watts (Whip), Geoffery Bacon (MLB), Hayden Pierce (SS), Justin Trimble (Rover), Ty Shrader (FS). Eric Osteen looks like he’ll take over kicking duties as Alex Carlton graduates (he was 1-of-2 on Saturday in field goal attempts). 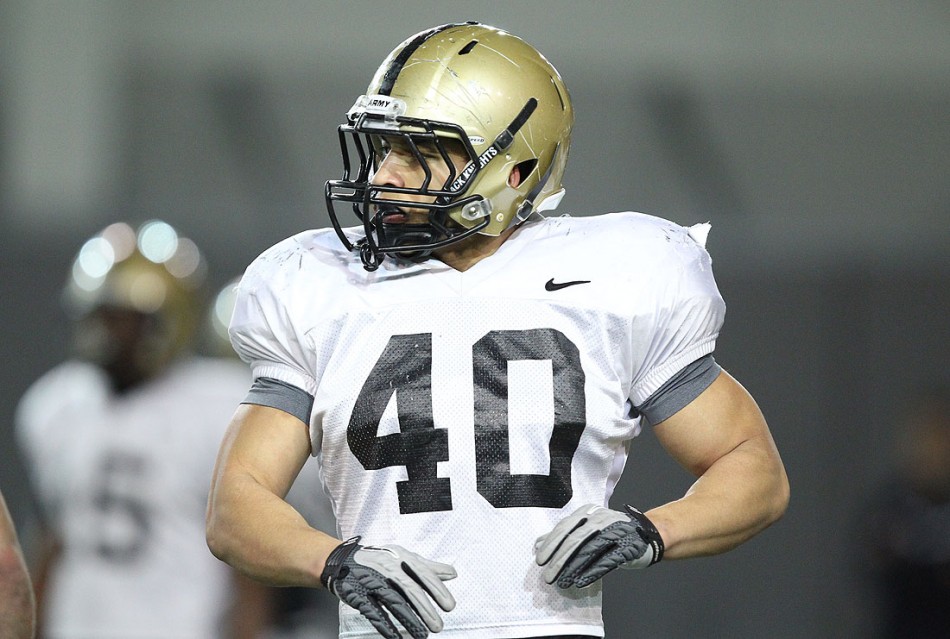 Sal from the Record has some good notes and observations about the ongoing spring practices (I wouldn’t be that concerned about players sitting out lately, but he notes who’s in and who’s standing on the sidelines).