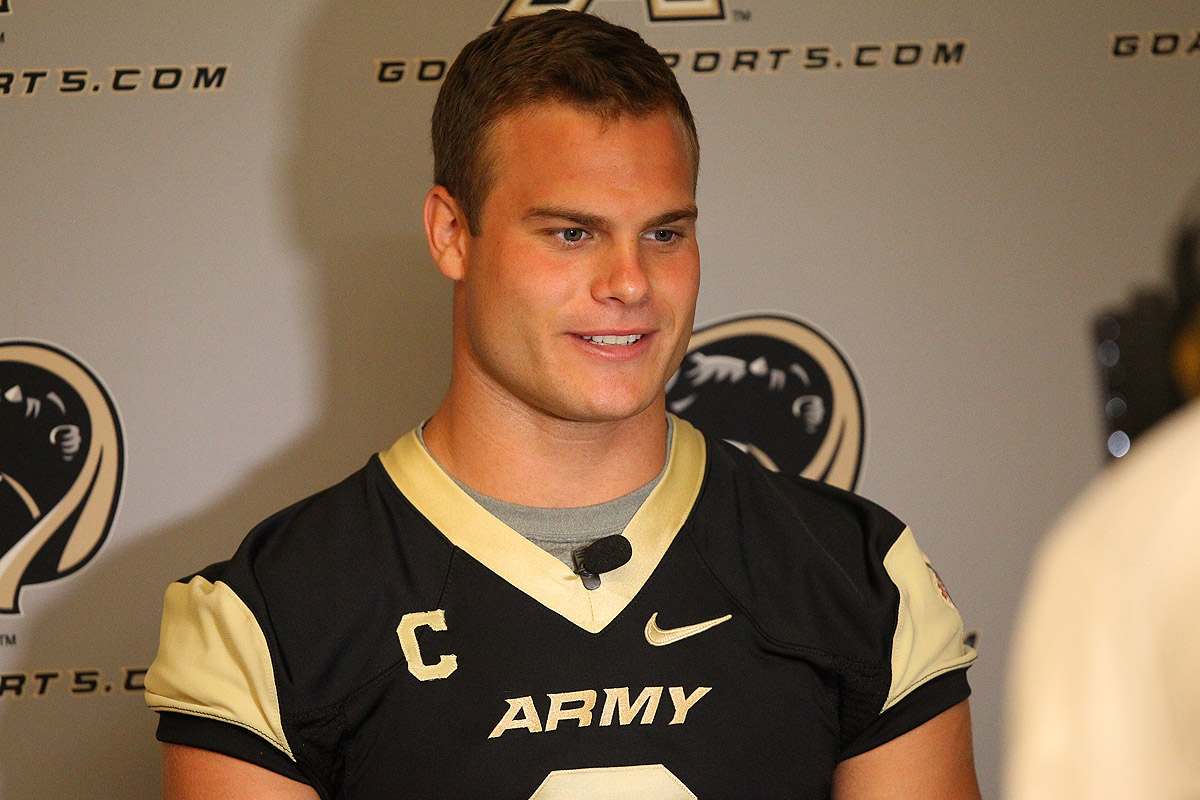 Army officially kicked off the 2011 season on Monday morning with its annual media day event at West Point, which was a good excuse for me to get back up to the Academy and see some of the boys. The event itself isn’t especially exciting, but you can tell, the pride and anticipation and excitement for the season was in everyone walking through the Kimsey Athletic Center.

Senior linebacker Steve Erzinger (above) will officially retain the captaincy he inherited during the spring season, and I don’t think that was too surprising to anyone — Erzinger was a great complement on defense the last two seasons alongside Steve Anderson (his pick against Navy in 2009 stands out as one of his more clutch moments).

Erzinger also apparently hasn’t skipped the gym too much this summer — the guy is a beast. I jumped into the weight room for a few minutes (all-time academy sack-leader Josh McNary holding things down) and found Erzinger working out with junior QB Trent Steelman and junior linebacker Nate Combs. Combs missed most of last year with an early injury, but he seems like he’s become one of the leaders on the team heading into 2011.

“Guys have been joking that they’re worried that I have a lot of pent up energy and frustration. Honestly, I’m excited,” Combs said. “I woke up this morning and I was pumped up. I could barely sleep because I knew we were putting on the helmets today. I can’t wait.”

The team also voted senior linebacker Andrew Rodriguez and senior quarterback Max Jenkins as the other two captains. Coach Rich Ellerson agreed to the plan despite it going against his usual routine of rotating captains for much of the season.

And that’s a good sign — Rodriguez is immensely respected by this team, and everyone wants to see him back on the field in 2011 after back injuries limited him to summer practices last year. Jenkins has done a great job as the secondary QB, and he and Steelman have a good relationship anyway.

“It’s a great honor to be chosen by your classmates and teammates,” said Rodriguez, who was among Army’s top tacklers in 2009. “I feel really fortunate and grateful that my teammates would do that for me.”

“It’s completely an honor and a privilege,” Jenkins said. “Andrew and Steve are huge leaders on this team, and being mentioned with them, as well as just being a team captain for the Army football team, mean a lot. That’s really just a title though. You look around and there are seniors, juniors and even some sophomores who are tremendous leaders. We need them to step up. It’s a formality, but it’s an honor to be mentioned as a team captain.” 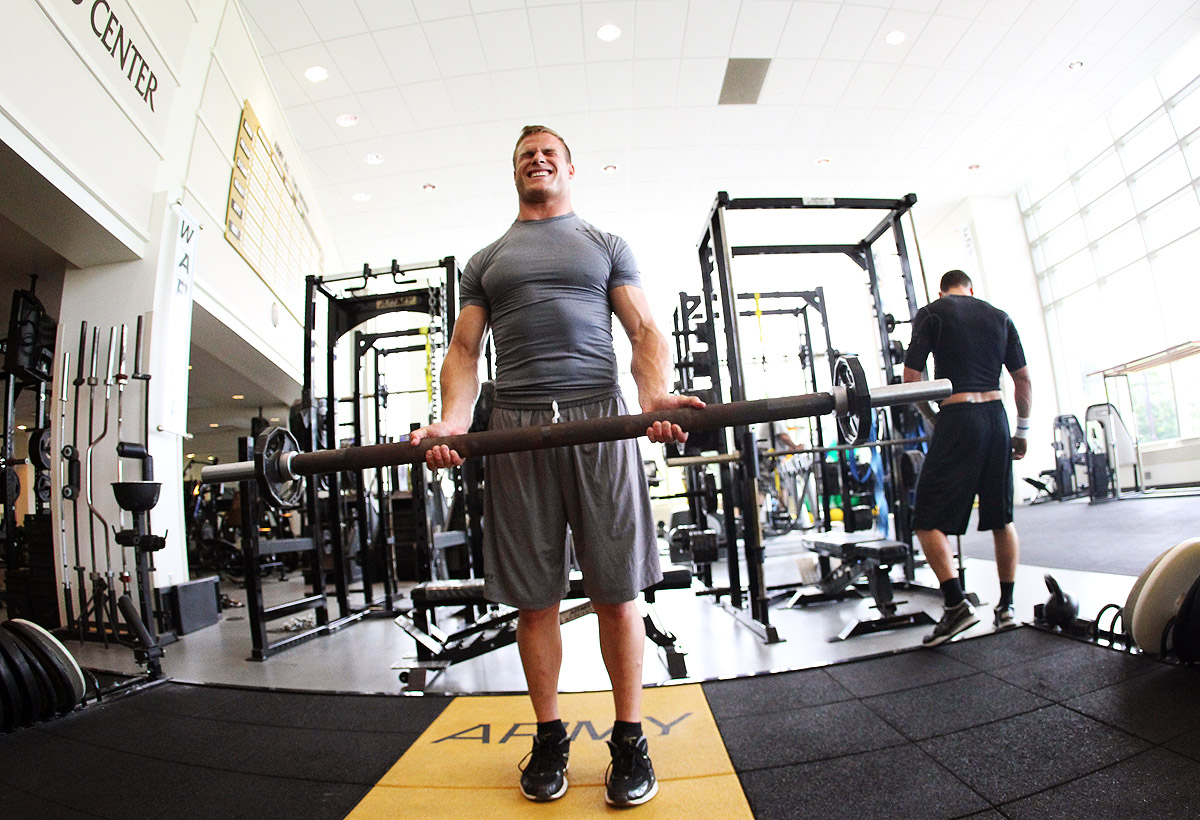 Erzinger gets to work with a huge rusty pipe. 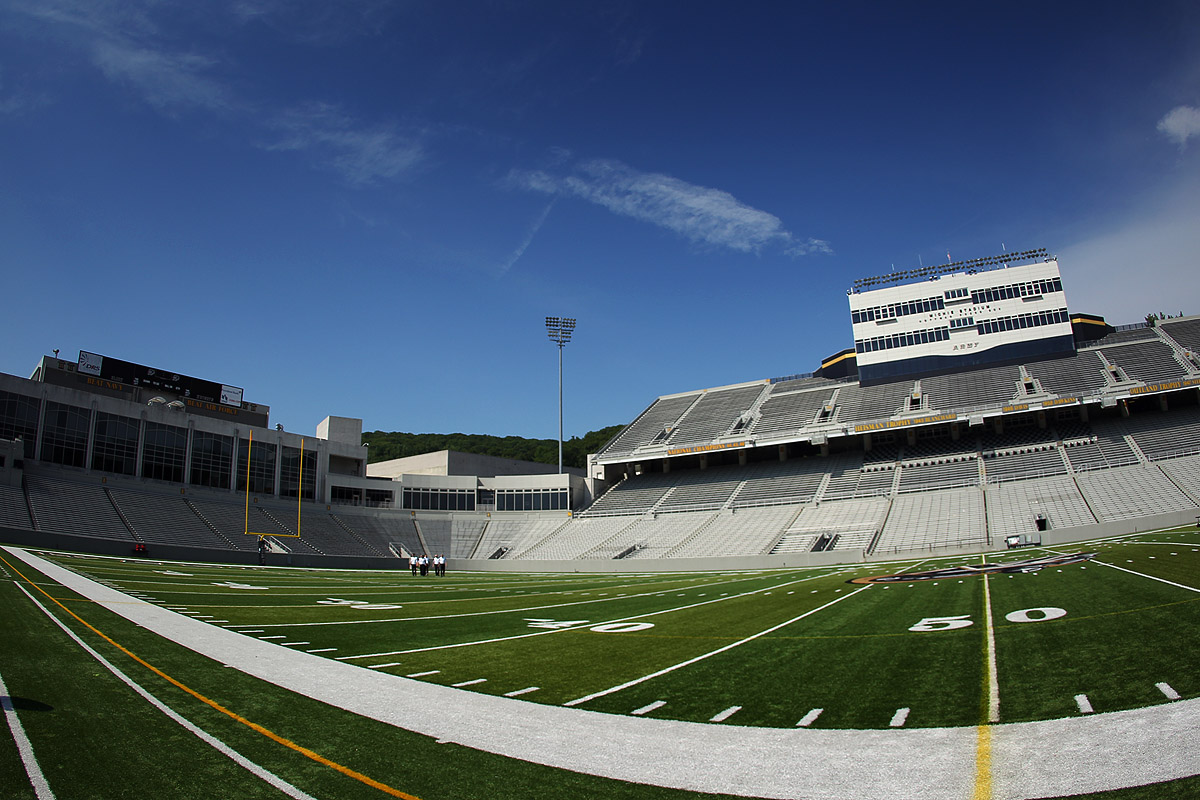 Players took a quick lap of Michie Stadium during the morning to have a posed portrait taken in the northwest corner. It was hot and humid, the primary reason behind coach Rich Ellerson keeping his team indoors for the morning. Michie itself is still getting worked on in terms of the east stands renovation. The stands have been powerwashed and new bleacher benches were being installed on Monday. 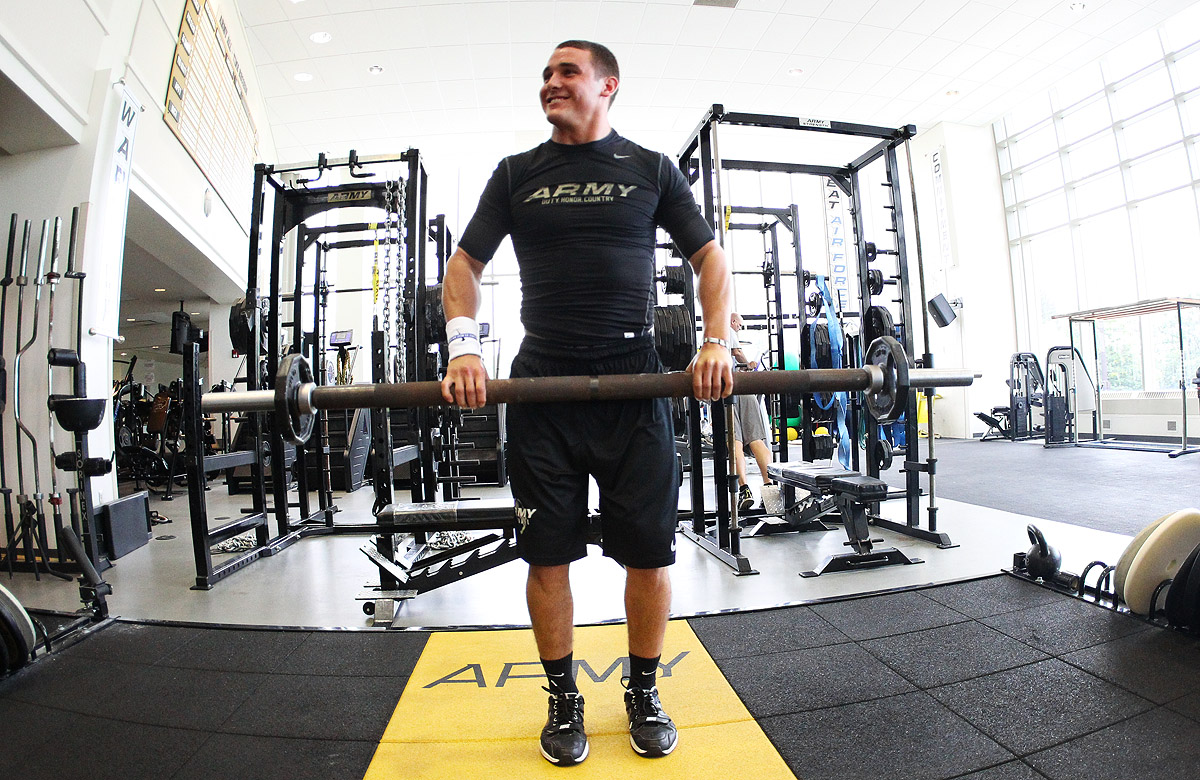 Steelman cracks a smile as I snap him lifting weights while the strength coaches did their part to chime in. I used a Canon 15mm fisheye lens for the gym shots, so images like this — I’m probably much closer to Trent than it appears, which is reason enough for him to break down laughing.

This, though, was a good sign — Steelman sort of quietly dealt with a shoulder injury in the spring but is obviously feeling good now.

“Physically, this is probably the best I’ve felt since I’ve been here,” he said. “I’m the heaviest I’ve been, but it’s also the most explosive. The training staff and the doctors did an excellent job of developing a program and pushing me to get where I needed to be.” 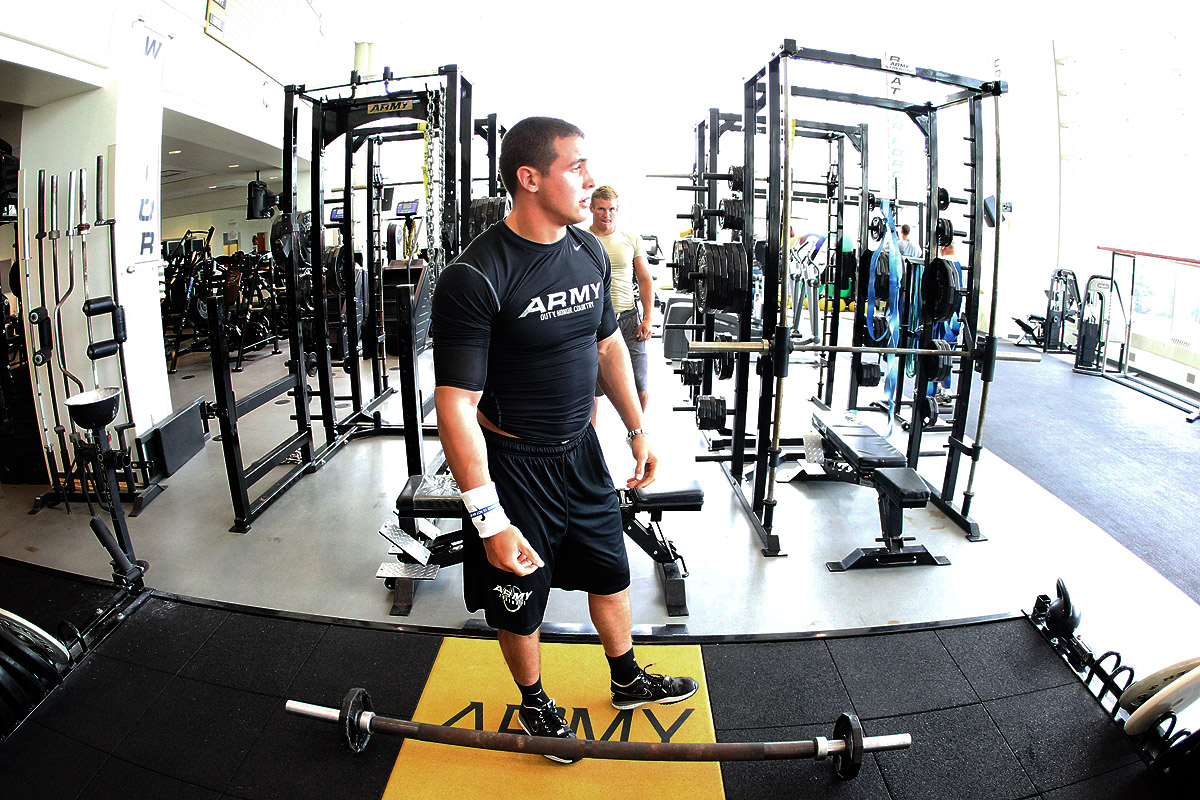 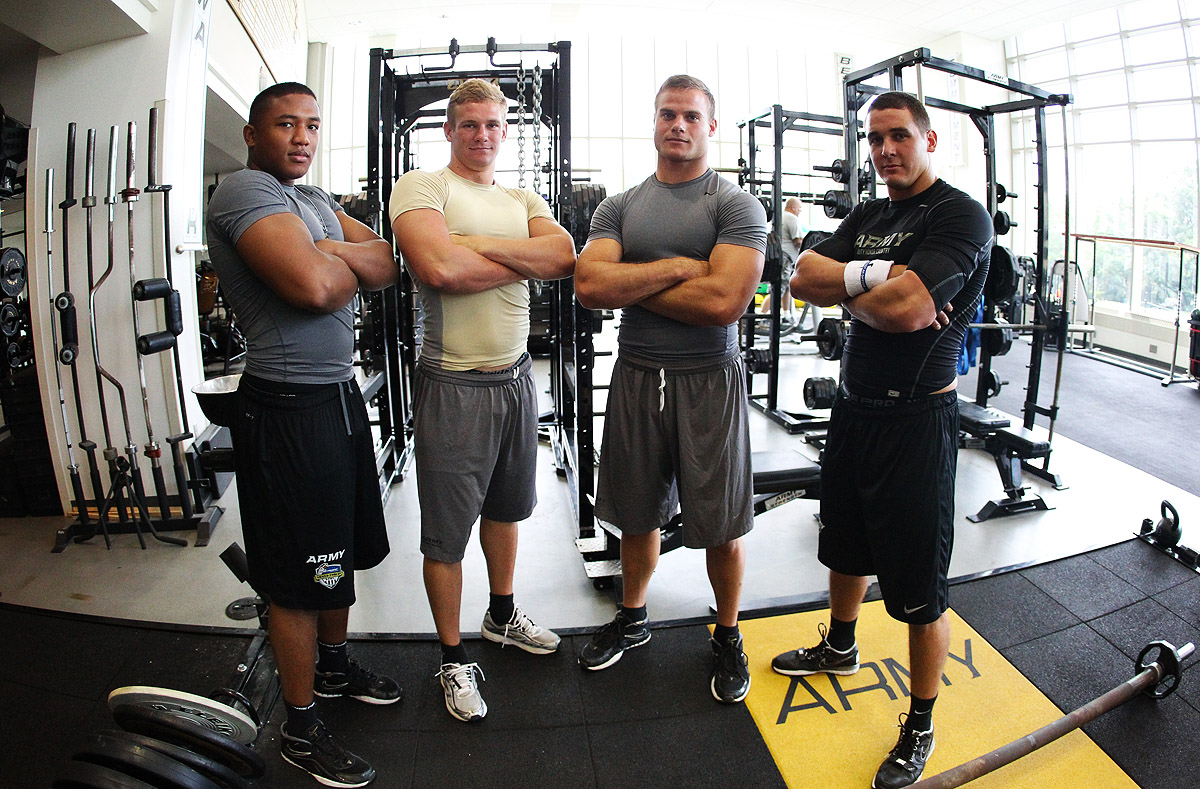 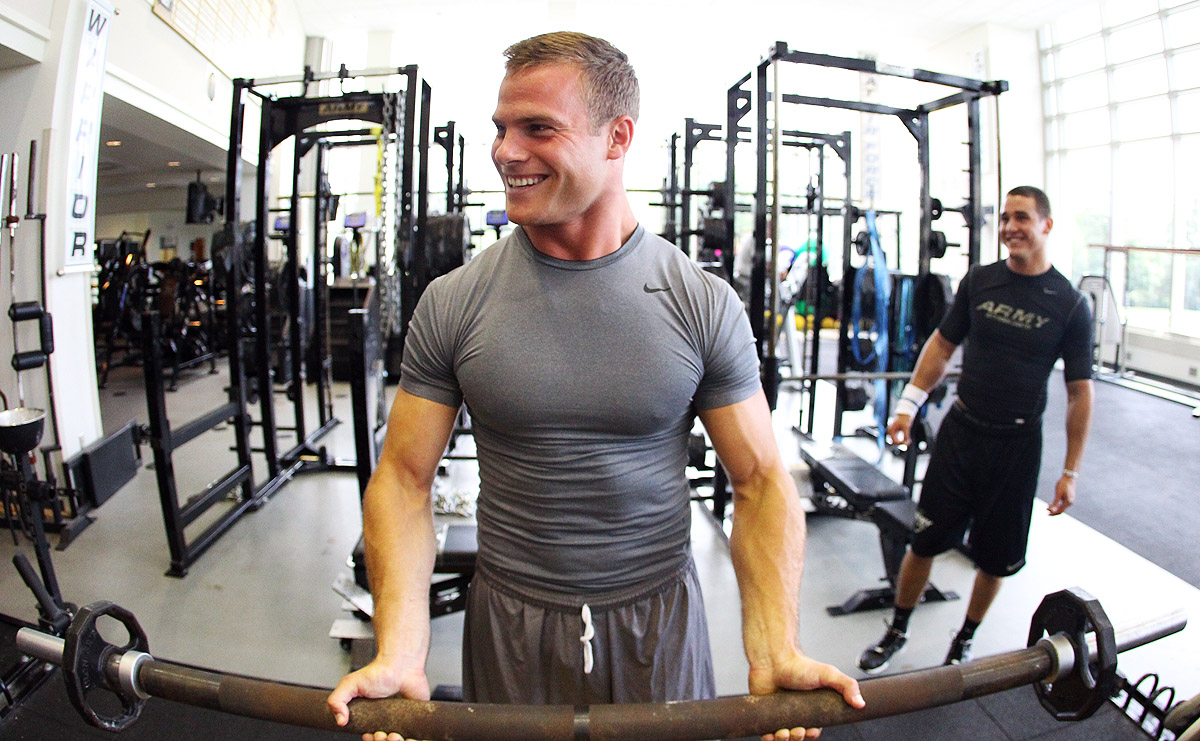 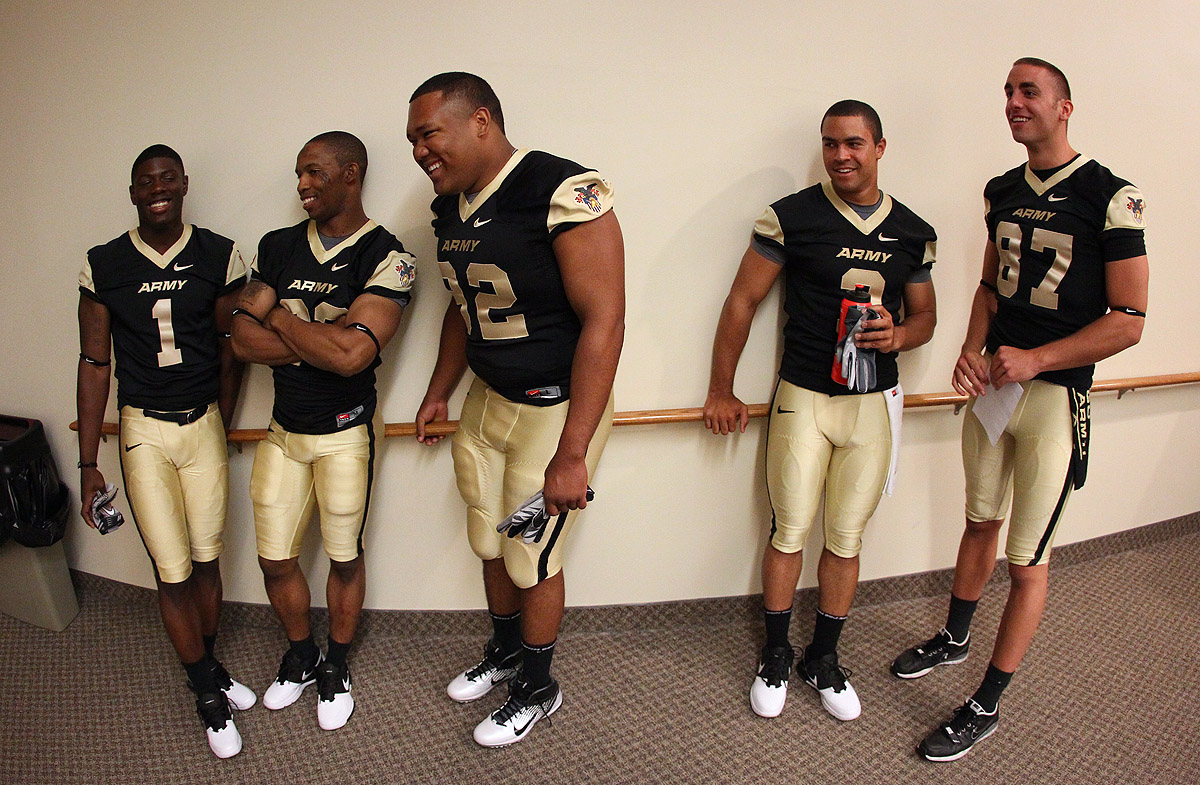 Some of the best images and moments were of course around the video interview area, where the cadets will grilled by Rick Johnston on their favorite late-night snacks, what they’d do if they could time travel, change into another person, etc. Basically, an opportunity for everyone else to laugh at someone in the hot seat. One guy said he’d go back in time and have his family invent the internet — this is someone who has previously thought about time travel. 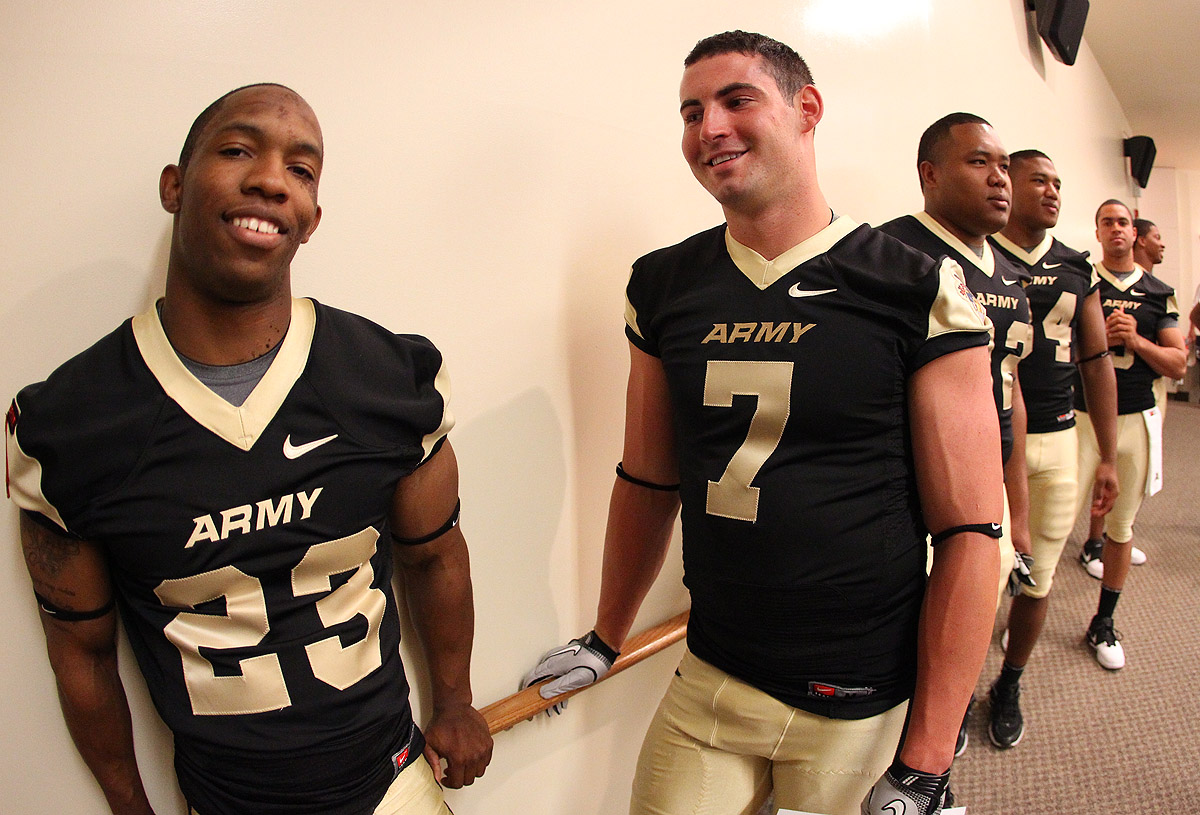 “A big part of my training this summer which was beneficial was that I got a good chunk of time at home which is something I haven’t had in a long time,” said the Delafield, Wisc. native. “I went through beast [new cadet field training] my first summer and then Buckner, and in both of those details, I lost a pretty good amount of weight. It was a great summer for me this year. I was able to work hard, put on some weight and get my body healthy again. I feel as strong, explosive and fast as I ever have.”

So, Steelman and Hassin both feel more explosive, Nate Combs woke up with his helmet on this morning, Erzinger looks like the Hulk and we’re only now at Day 1.

The team held an afternoon practice without pads afterwards — a note from that was sophomore Jonathan Crucitti (below) seeing time as a wide receiver. Jon is a pretty ridiculously versatile guy; he saw time last year as a fullback, a good blocker, and got some carries, including some against Notre Dame. He saw time at wideout in the spring, and this is after he was the Conference Punter of the Year back in high school, where he played football, basketball and baseball and captained two of the teams. He also plays baseball at USMA. 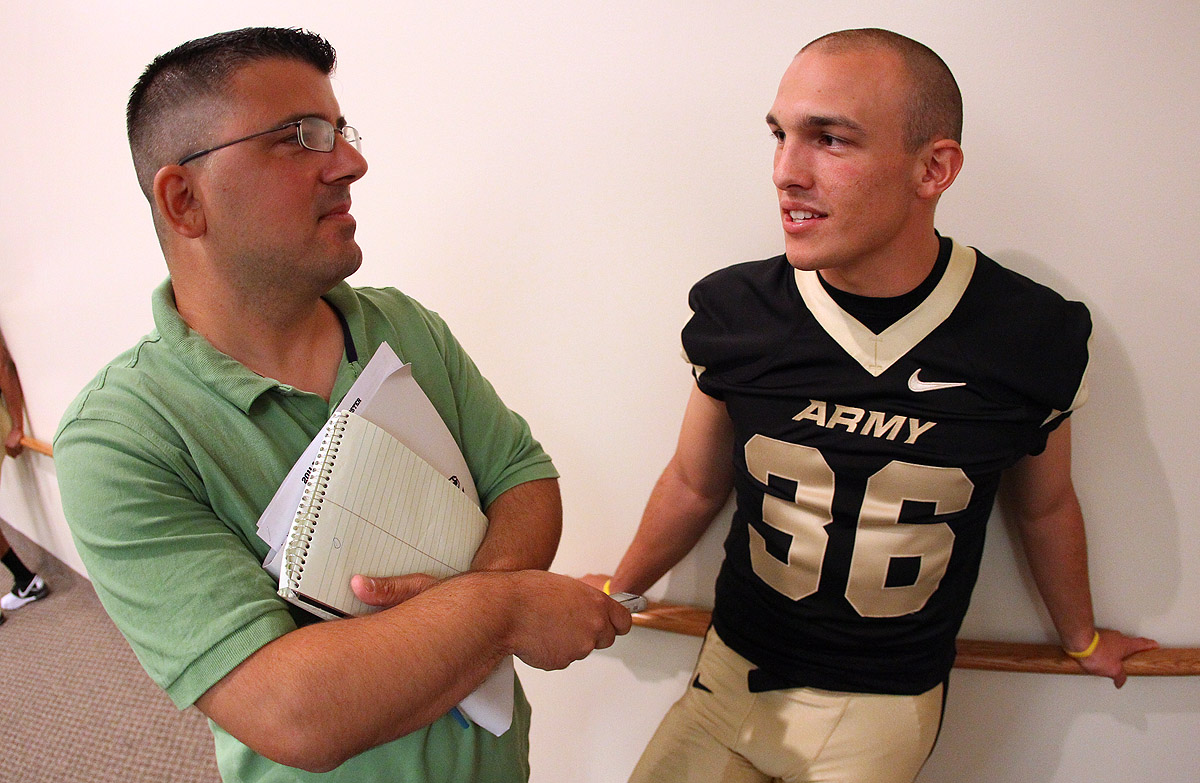 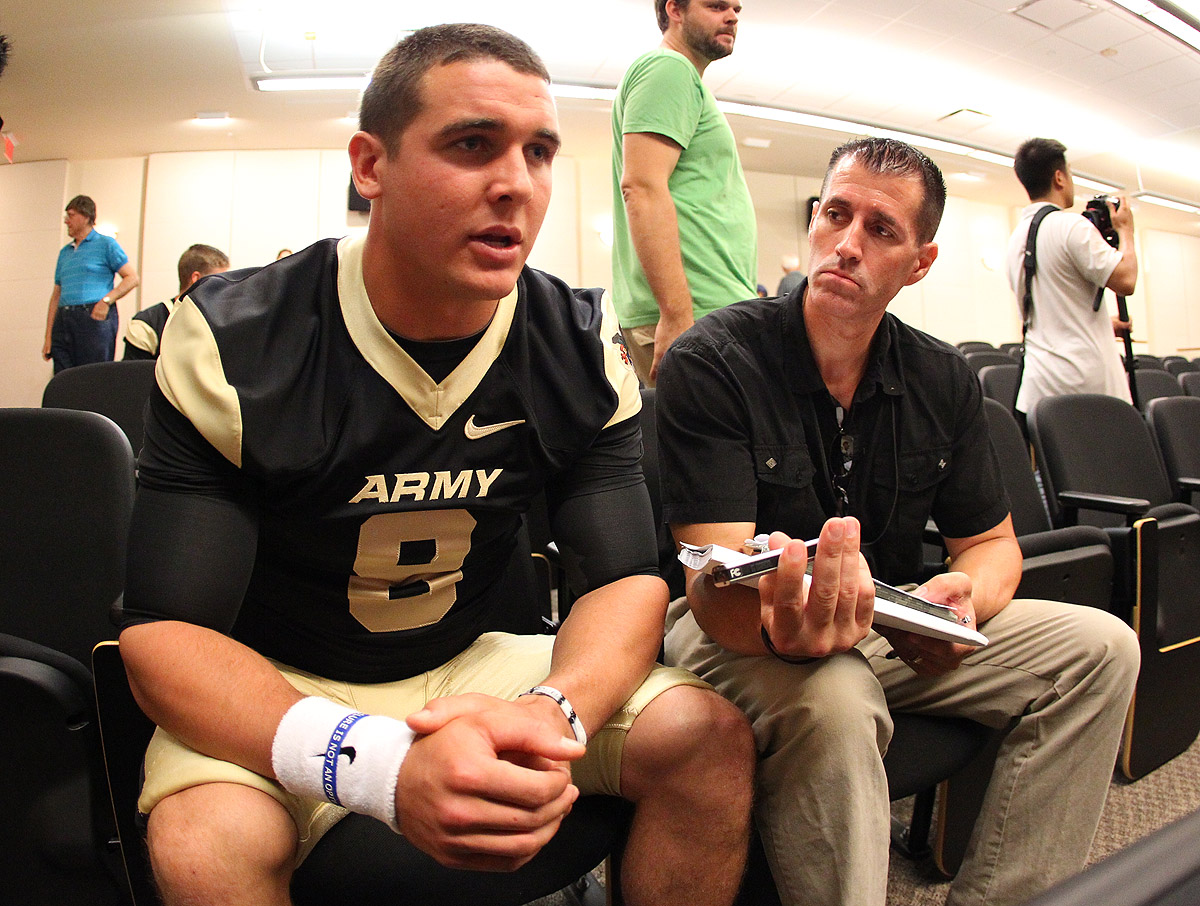 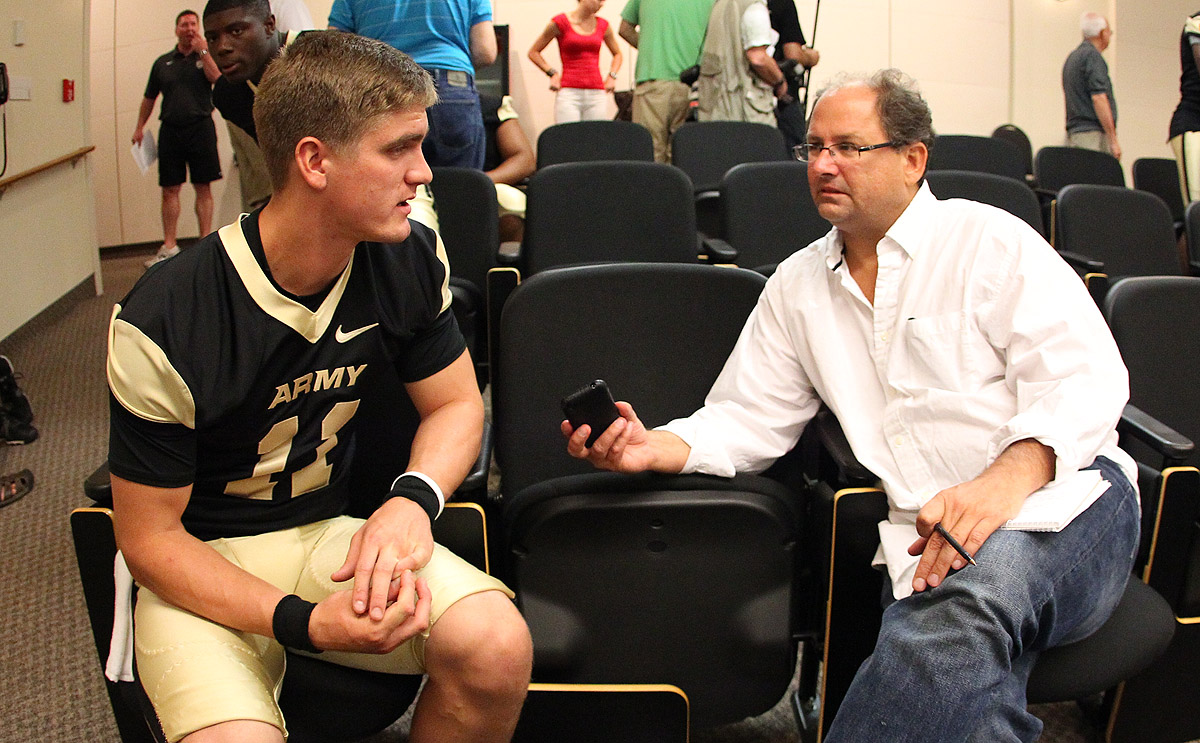 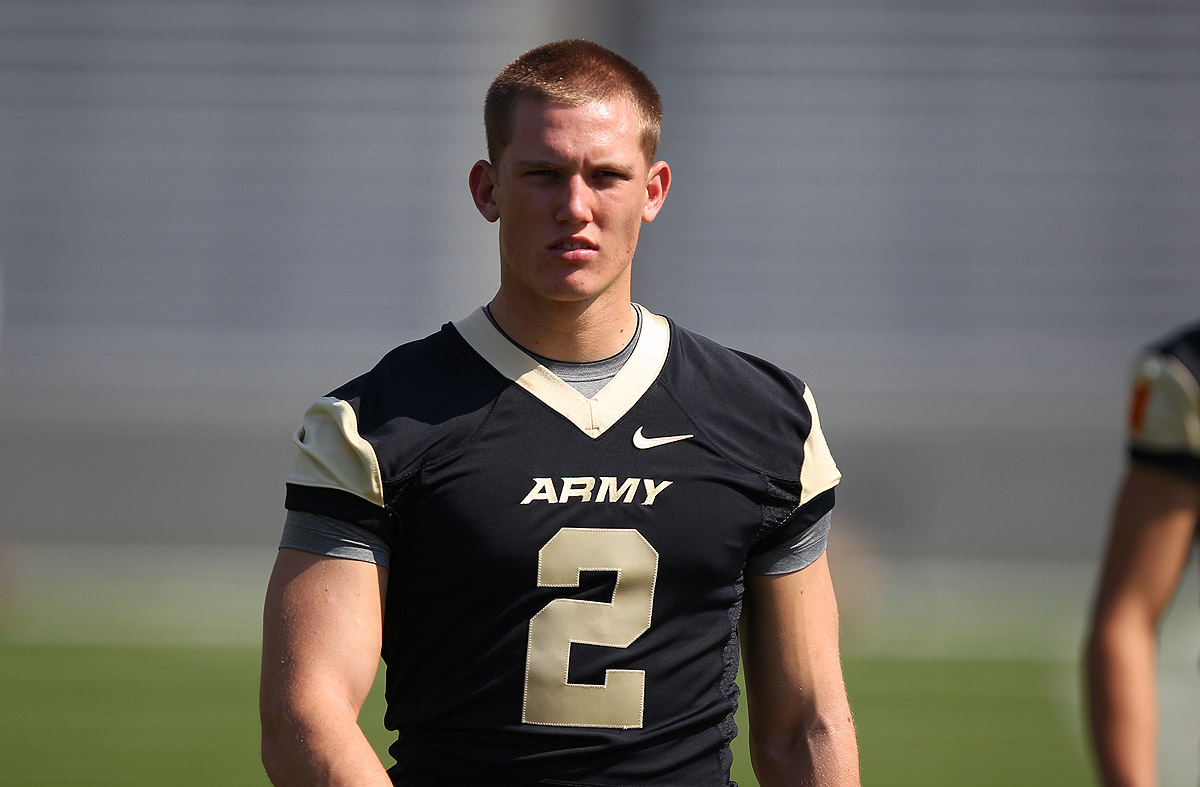 Freshman saftey Addison Holstein has Richard King’s old number — according to Rivals.com, he was being recruited by Stanford but opted to come to West Point, where he called summer training “fun.” 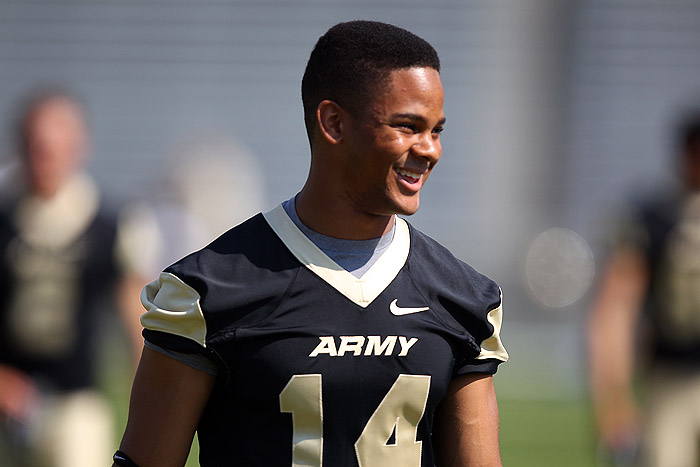 A few more shots here on the goARMYsports.com photo gallery. Previews for the offense (a photo of Steelman) and defense (Mackey at Rutgers) are up, and the media guide should be following later this week.